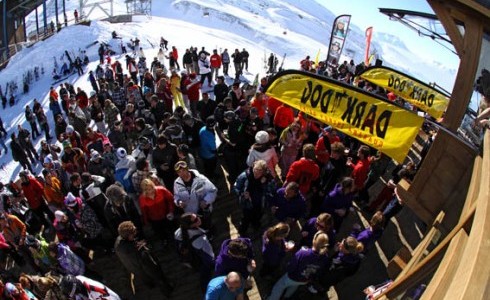 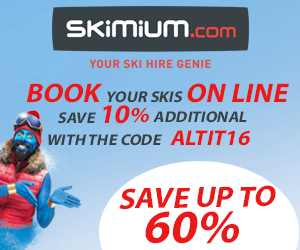 The “two Alps” in the name do not refer to the two mountains that the resort encompasses but rather the two villages of Vénosc and Mont-de-Lans that sit at either end of the north-south plateau on which the resort was built. Access to the resort is by road from the north - no road connects the resort to Vénosc down the steep slope to the south, but a gondola connects the two.

Les Deux Alpes offers approximately 220 km (137 mi) of pisted runs and 2,300 m (7,546 ft) of vertical drop. In terms of pistes the resort has been termed "upside-down", as the lower slopes down to the resort are steeper and more challenging than the higher ski areas, including the wide and forgiving glacier runs. Less advanced skiers either take a gondola down to the resort or follow a lengthy, gentle but narrow, track on the path of the access road. A wide area at the very bottom by the town is given over to nursery slopes. In total there are 100 marked runs spread across the resort however, in addition, it is said to have as much off piste as groomed piste. [1]
Les Deux Alpes also boasts one of the most extensive and revered snowparks in Europe, with a halfpipe, multiple kickers, two boardercross courses and many grinding rails. The snowpark is re-modeled with new featurers added each season. It also hosts many worldwide competitions sponsored by local restaurants such as Chez C. Dave and Le Chop Shop.
Les deux alps also boasts the use of ęcole du ski français, which is the largest ski-school in France.

All images are used with permission of and are copyright of Les Deux Alpes Tourist Office and must not be reproduced without their permission.